Liberty township formerly embraced the territory included in Lincoln township, but being inconvenient for the settlers that resided in (now) Lincoln township to attend elections, in June, 1866, according to petitions of Lincoln settlers, it was detached and made an independent township. Liberty is generally known as being among the first settled townships in St. Josephs county. The first settlements were made in 1833 near North Liberty, by John Kane, John and Jacob Earhart and Isaac Townsend. But few other settlers came into the township till 1836. John Rupel came in January, this year, soon followed by David Rupel, Jas. Cole, Jacob Rupel and Joseph Liggett.

In May, 1837, the township was organized by the following persons: Daniel and James Antrim, John and David Rupel, Samuel Loring, James Cole, Jacob Repel and Joseph Liggett. The first election was held the same spring, in North Liberty, at the house of Jas. P. Antrim, who was elected Justice of the Peace. In 1838 Mr. Waldsmith, father of Geo. Waldsmith, a present resident of Liberty township, settled on section 30. 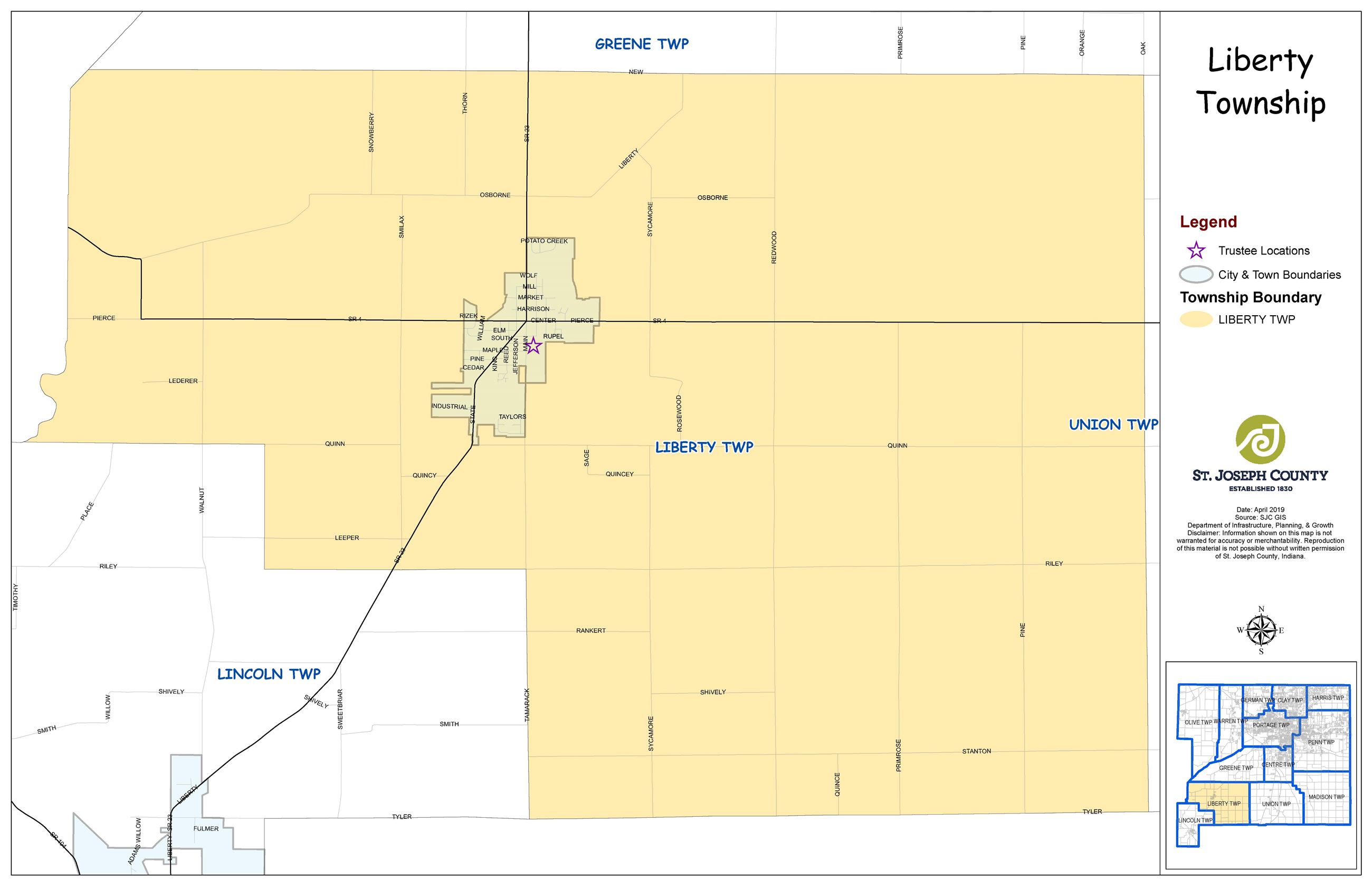 Then the early settlers met with hardships the present settlers know nothing of. They had to go to Elkhart in order to get wheat or corn ground for bread, and sometimes would have to wait nearly a whole week before their turn would come, all the while their families at home subsisting on nothing but what we call " hard tack " and wild meat. The wives of the settlers shared their trying lot with great patience and boldness of spirit. Their husbands were compelled to go away from home and work, leaving home just as soon as the morn of Monday would break; go to a place ten or twelve miles distant, where he would labor all the week and not return home till the stars had lit the sky on Saturday evening; and as he would plod his weary way along the Indian trail bearing a piece of fresh beef, which was a part of the fruits of his week's labors, frequently the hungry wolves would get scent of the precious meat he had, and he could hear their howling in the distance, then a little nearer and a little nearer till their incessant howls only told that they were persistently too near. Then he would be compelled to drop his meat to be devoured by the angry wolves and would have to go home at last without meat for his family. At this time the Pottawatoinie Indians strolled in bands through the forests of this vicinity in search of Big Iiijun's deer," which roamed in great herds through St. Joseph county. The Indians at this time were peaceable, but by their savage and warlike actions would frequently frighten the settlers' wives. At one time in mid winter about a dozen of these red skins called at the house of Mr. Waldsmith, and he not being at home, Mrs. W. was greatly terrified. They (the Indians) would stand around the fire, and, scraping the snow off their "leggins," would stop and point their huge bowie knives at Mrs. Waldstnith's children and say, " See, dat is de white man's pappoose; de white man's pappoose." This frightened Mrs. W. almost to death and she treated them with great hospitality, - with a great deal more than human nature would do under any other circumstances. She gave them food and almost everything in that line, and finally they departed, much to the joy of their benefactor. But it was only a few years before the Indians were removed westward.