For three manifest reasons, the history of Clay township must necessarily be short. First, the township itself is small, and unless something remarkable be connected with it, it could not have a lengthy and elaborate history. Secondly, it was not organized as a township until 1840, and therefore everything concerning its early history, particularly concerning the names of early settlers of the township up to that year, will be included in the history of German township. And thirdly, the most important thing in connection with Clay township, and indeed, in all probability, in connection with St. Joseph county, namely its educational interests, including Notre Dame University and St. Mary's Academy, has been included in the State and county history of this work.

At the June session of the Board of County Commissioners in 1840, an order was passed constituting Clay a separate township, and it was named after Henry Clay, who was just in the prime of his political glory. The first election in the township was held in "Brooks' barn," now burned down, then on section 30. The first justices of the peace of Clay township were Jonathan Hardy and Samuel Brooks.

During the early settlement of German township, that part of it lying east of the St. Joseph river, which is now Clay township, did not settle very rapidly until about 1837-'8. The first settlement was along the eastern bank of the St. Joseph river, where John Eyler, Lambert McCombs and John Weaver, a German Baptist preacher, together with a few other families, located. From that time to the present the population has gradually increased, and at the last census it was 1,476. At present the citizens are mostly Germans. 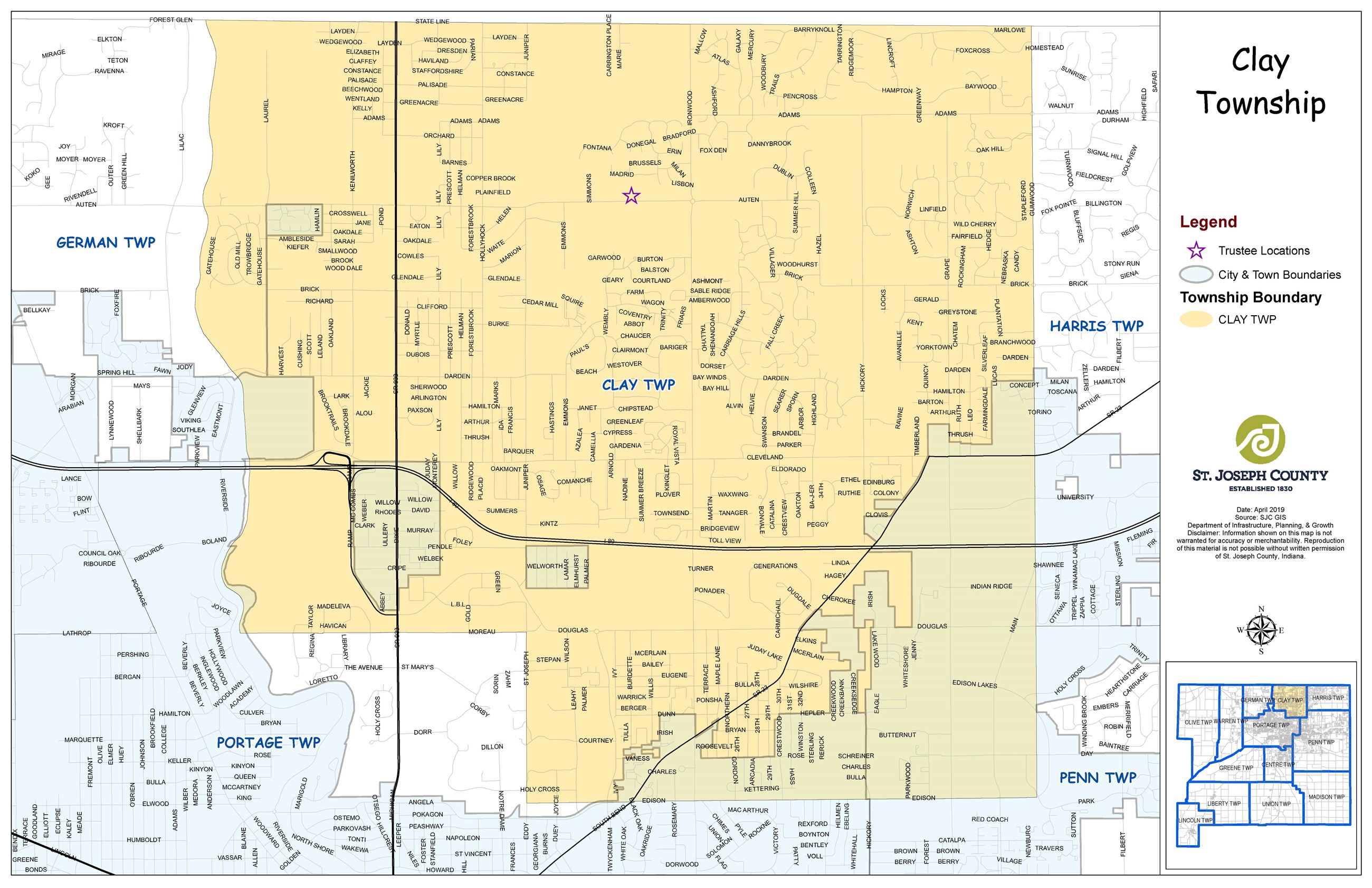 Clay township is 38 north, range 3 east, is situated in the northern part of St. Joseph county, and is bounded on the north by the State of Michigan, on the east by Harris and Penn townships, on the south by Penn and Portage, and on the west by the St. Joseph river, beyond which lies German township. Nearly all of the land is broken, or marsh, or timbered land, and across the southwestern part flows a small stream branching off from the St. Joseph river on the west. Across the western part runs a branch of the Michigan Central railroad, connecting South Bend and Niles, Mich. The sections of the township are somewhat irregular,a part of the northern road being in Michigan; and on the west the line is very irregular, owing to the fact that when the township was organized, the St. Joseph river was made the western boundary. At present a large and substantial wooden bridge is in process of erection across the river, from section 23, connecting Clay and German townships.

There is a grist mill on section 23, on the river, owned by John F. Curly, of South Bend. At present the mill is not running; it was built several years ago by Jonas Harris. Prior to the erection of the grist mill by Mr. Harris, Mr. Weaver had built a sawmill on the same location; Mr. Weaver also had a carding machine and fulling mill, and for a time did quite an extensive business; but these were afterward removed, and their place supplied by the present grist mill. There was also at one time a fulling mill near where St. Mary's college now stands, run by a man named Graham. And at one time in the history of the township, S. Ulery ran a carding machine. But these have all long since been dispensed with, and today there is very little or nothing to add to the business interests of the township by way of mills or villages, there being but one of the former, and none of the latter. But villages in Clay township are not necessary, as it is conveniently and closely situated to South Bend. Politically, the township is Democratic.